Sutcliffe Sowden and the Brontë family 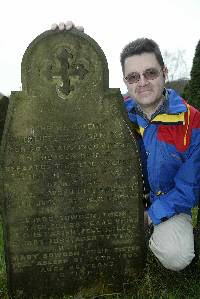 Virginia Mason writes in The Halifax Courier about Arthur Bell Nicholls's connections with Calderdale. These connections are related to his friendship with Sutcliffe Sowden, the vicar of St. James's Church in Hebden Bridge, and with Sutcliffe's brother, George.

He was married to one of the most famous novelists of all time – Charlotte Bronte – and had Calderdale connections. (...)

Charlotte was also the only one of the Bronte girls to marry, and her husband was Arthur Bell Nicholls who, reveals Halifax historian David Glover, had Calderdale connections.
David has been busy researching these local links. (...)

The couple [Charlotte Brontë and Arthur Bell Nichols] were married on June 29, 1854 and it was because of this happy occasion that the Calderdale links were cemented – one of Nicholls's closest friends, Sutcliffe Sowden, was asked to conduct the marriage ceremony.

David's research has revealed that Sutcliffe Sowden and his brother George were born and grew up at Sutcliffe Wood Farm, at Hove Edge, Brighouse – their father was a woolcomber and tenant farmer on Anne Lister's estate. Both brothers were to become good friends of Nicholls and eventually of Charlotte's.

In a letter to her friend Ellen Nussey dated November 7, 1854, Charlotte (referring to the Sowden brothers' stay at Haworth Parsonage) wrote: "Mr Sowden and his brother were here yesterday – stayed all night, and are but just gone. George Sowden is six or seven years the junior of Sutcliffe Sowden... he looks very delicate and quiet – a good sincere man – I should think..."

Sutcliffe Sowden was baptised at St Matthew's, Lightcliffe (the old church) in October 1816 and, having been ordained in 1839, he went on to become curate at Cross-stone near Todmorden. It was here that he first saw (but did not meet) Mr Bronte and his daughters. In 1841 he was appointed vicar of St James's Church, Hebden Bridge, where was to serve for 20 years.

"It was there he came to know other young clergy in the area, including Nicholls at Haworth.

"The two men became close friends and Sutcliffe thought nothing of walking over Cock Hill to spend occasional evenings at Haworth and on June 29, 1854, he went on a joyful mission to Haworth to marry his friend to Charlotte Bronte.

"He describes the bride on that occasion as 'a snowdrop, a pale wintry flower.'"

Sadly, Sowden returned to Haworth only a few months afterwards but this time under very different circumstances.

Charlotte became ill and died on March 31 1855 and just days later Sowden read the burial service over her coffin. Six years later, in 1861, he made the journey once more, this time to conduct the funeral of her father.

Sowden's own end came suddenly and tragically just a few months later. He was only 44 when he was found drowned in the Rochdale Canal on August 8.

"An illness some years earlier had left him prone to fits of dizziness and the inquest said his untimely death was due to this, causing him to fall into the water while returning to Hanging Royd, where he lived along the canal bank," explains David.

Touchingly, Nicholls travelled to Hebden Bridge from Haworth in order to conduct his friend's funeral service.

The report in the Halifax Guardian indicated just how well thought of Sowden had been: "The funeral took place on Tuesday afternoon. Many of the principal shops were closed, the procession numbered upwards of 300 persons."

Sowden never married and it was widely believed that he had wanted his brother George to succeed him as vicar of Hebden Bridge, which he did. He was responsible for building up a large congregation at St James's, presiding over the building of the chancel of the church and the remodelling of the nave.

Both brothers are now commemorated here in a number of ways, including the font, dedicated to the memory of Sutcliffe Sowden and the Sowden Chapel, which commemorates George Sowden and was built five years after his death.